Experiencing a new adventure can be scary for some, and sometimes gaining a little more knowledge of what is waiting for us can take that fear away and turn it into pure excitement; that's why I've chosen to share five fun facts about scuba diving in Cozumel that you most likely didn't know, but that make great conversation topics when you visit the island. Let's get started!

Growing up, I always thought that oceanographer Jacques Ives Cousteau did the first Scuba Diving Operation on the island. Still, while researching for this article, I learned that it is, in fact, Bob Marx, a staff sergeant of the US Marine Corps, who takes the credit for it.

Bob Marx arrived on the island with Mel Fisher and Mel's wife to shoot underwater footage in 1957. He chose to stay behind and began teaching locals how to dive and also selling dive excursions to tourists for what is said to have been 8 USD. He claimed that he founded the first dive resort in what we now know as Museo de la Isla, back then called Hotel Playa. Look how far we've come since then; now you have a wide variety of options and packages to choose from.

Jacques Ives Cousteau: Oceanographer, co-inventor of the autonomous diving regulator, and all-time diving enthusiast, but to Cozumel, he'll forever be known as the man who shared the wonders of the island with the rest of the world and helped create today's fantastic reputation. I did mention him in the previous point, but I thought he deserves a more in-depth conversation.

Jacques first visited the island a year after Cozumel's airport was inaugurated in 1945. He came back to the island with his team onboard 'Calypso' to film the documentary "The Silent World", released in 1956. He won the Palme d'Or award at Cannes Film Festival and an Academy Award for Best Documentary Feature. The fame that came from the Documentary inspired articles that would encourage divers to go to the island, inspiring Bob Marx to move here.

Throughout the 1960s, you could see more people getting inspired and opening dive shops; such is the case with "El Clavado" owned by Tiburcio García in 1959 or Ramón Zapata's "Aqua Safari Dive Shop" in 1960. We are all forever thankful for Cousteau's depiction of the island and all he accomplished for the diving community.

"Cozumel is one of the best places around the world for diving, thanks to its fantastic visibility and its wonderful marine life." Jacques Ives Cousteau

Bested only by Australia's Great Barrier Reef, Cozumel holds a very well-deserved second place. The Reef Barrier protects our island from strong winds. It produces our incomparable white sand. It contains such diversity that can only be truly enjoyed by seeing it first-hand. It has been declared World Heritage for Mankind by the United Nations Organization for Education and Culture (UNESCO). It is living proof of nature's exquisiteness.

The Mesoamerican Barrier Reef System, also known as the Great Mayan Reef, is located along the coasts of Mexico, Guatemala, Belize, and Honduras, covering over 1000 km. It is home to more than 65 species of corals and around 350 species of mollusks, and 500 species of fish. 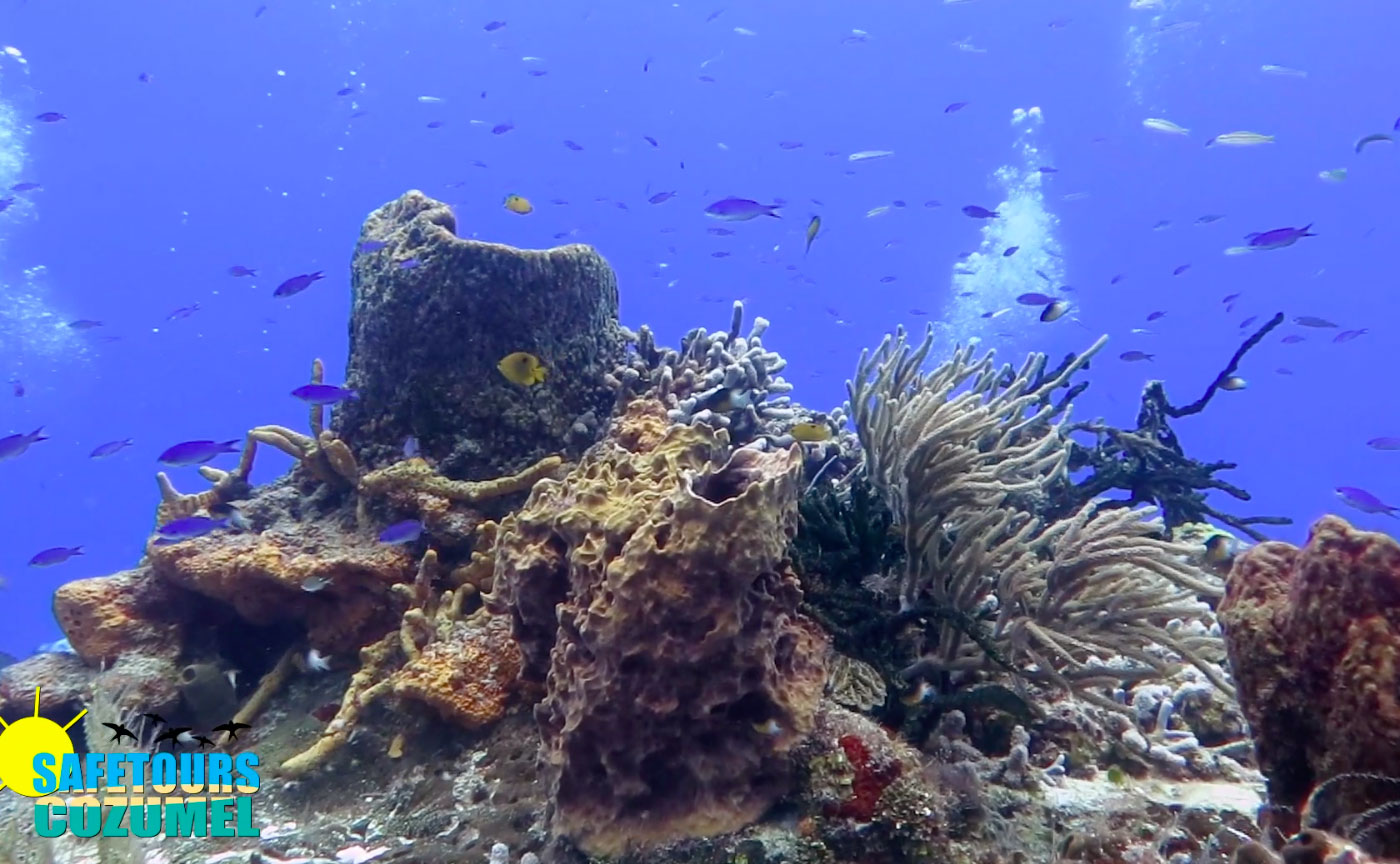 Cozumel Reefs National Marine Park was created in 1996 to preserve the area, and it protects part of the Mesoamerican reef system. Most Scuba Diving and Snorkeling takes place in these protected areas. Because of the success in saving the local marine life, it isn't rare to spot turtles or rays. Its waters are currently home to 105 different types of coral and 262 species of fish, according to Mexico's National Commission for Protected Natural Areas (CONANP). Around 1.8 million tourists visit Cozumel's Marine Park.

It's imperative to follow indications when visiting Marine Park protected areas to keep the marine life safe; please listen to locals when they're explaining what is allowed and what isn't so that we can preserve the underwater beauty and continue appreciating it.

The Splendid Toadfish is a fish only ever found in Cozumel with a broad head, flat, and with fleshy barbels, but its bright colors are what make it distinctive: All its eight fins have a bright yellow border, its mouth is also yellow, and the head and body are dark purple with black and white stripes.

Their diet consists of small fish, shellfish, and worms, and they hunt at night. It's definitely something to keep on the lookout while scuba diving. If your trip is at night, don't get weirded out if you hear a croaking underwater sound; it just means it is date night for the Splendid Toadfish.

Now that you've learned all these fun facts, do you find yourself interested in visiting us and being awed by our waters and the magic that awaits you in its depths?